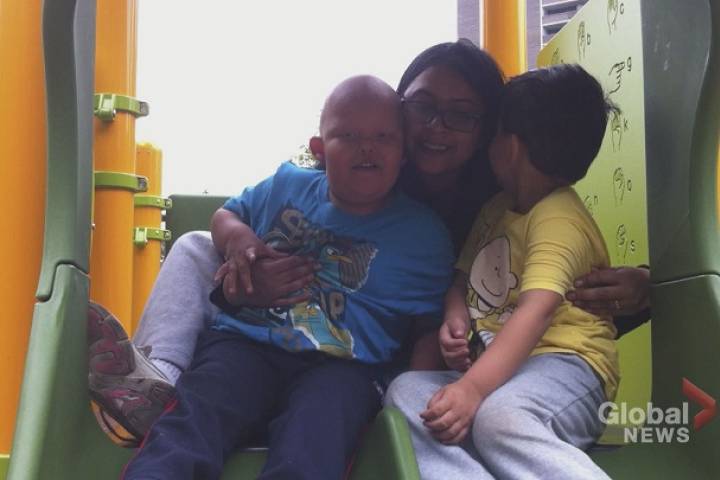 A major Canadian insurance company is restoring long-term disability coverage to an Ontario woman following a Global News report on legal action taken against the insurer.

Sun Life Financial had given notice to revoke long term disability benefits for Sandra Bullock of Georgetown, Ont. The company claimed Bullock was fit to work, and not entitled to payments, because she was able to provide care for her nine-year old son, Jacob, who is severely developmentally-delayed.

The company argued that since Bullock, 44, was caring for her son, she should be able to return to her work in an administrative role at a company in downtown Toronto.

“I’m stunned,” Bullock told Global News in late November, saying as a parent she had no choice but to care for her son as best she could.

Lawyer James Fireman agreed to represent Bullock and filed a $5.3-million legal claim against Sun Life. The case has not been proven in court and is proceeding.

But shortly after the claim was filed and Fireman and Bullock made their case on television, Sun Life changed its position.

“Both the legal claim and the story by Global News highlighted the absurdity of the Sun Life position,” said Fireman, a partner at Samfiru Tumarkin LLP.

After the report aired, Sun Life continued to provide benefits temporarily despite its initial threat to cut off coverage.

Sun Life would not discuss the particulars of Bullock’s case, citing privacy.

“We are sincerely concerned about Sandra’s health and well-being, her case being our primary focus,” said Gannon Loftus, director of corporate communications for Sun Life Financial, in a written statement to Global News in November.

“Our teams are reviewing the matter and working towards an appropriate resolution.”

Then, in late January, Fireman received a letter from Sun Life indicating coverage would not be denied after all.

“They will put her back in claim and acknowledge that she does meet the criteria of totally disabled,” Fireman told Global News.

He said the many people who are denied benefits by insurance companies face an unlevel playing field until they receive legal representation.

“In many cases, people are denied their benefits and they feel there is nothing they can do. It doesn’t have to be an unfair process but it seems that way when you’re not getting any help,” Fireman said.