Jill Scobey said the act discriminates against families with children with disabilities and her 15-year-old daughter Raedun.

Read more:
Parents of Alberta students with disabilities worry about return to school

Raedun has Down syndrome and had been attending the same out-of-school care program in the city since she was in Grade 1, but last Tuesday, Scobey was told her daughter could no longer attend.

The Child Care Licensing Act states a child under 13 years of age can attend a child care program, or a child 13 or 14 years of age who has special needs and requires care.

Scobey said her daughter turned 15 in August, and functions at the level of an elementary school-aged child. She said Raedun thrives on consistency and is given special care and attention at the out-of-school-care centre, where staff guide her through tasks, providing life skills and preparing her for adulthood.

“Not all children fit the mold. It’s not OK and it’s discriminatory against her.”

Scobey said a “typical” family would not be rushing to send their teenager to a care program and said there should be more options for families with children with disabilities.

She said her constitutional right to choose what works best for her daughter has been taken away. She has called on the UCP government to change the rules.

“The legislation has not changed in more than a decade,” said Lauren Armstrong, with the Office of the Minister of Children’s Services.

“It is not appropriate nor beneficial to have 15 year olds mixed in with six and seven year olds,” added Armstrong. 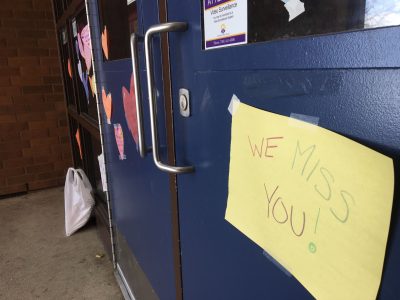 1:47
Parents say Alberta students with disabilities being left out

Parents say Alberta students with disabilities being left out

Scobey confirmed Children’s Services and the FSCD program is now working with her to find another option for Raedun and her daughter is able to stay at her out-of-school care program until other arrangements are made.

Under the FSCD program, a support worker will help create an Individualized Family Support Plan (IFSP) to determine the short- and long-term goals for a child in the home, school and community.

READ MORE: Alberta should use ‘holistic’ approach to safety standards for people with disabilities: report

Scobey said she is not comfortable sending her daughter to a private day home where there is no government oversight.

The mother has reached out to her MLA and other levels of government to spread her message.

“I’m very angry,” said Scobey. “I don’t agree that our choice, our right and our freedom to choose where she can be placed should be dictated.”

“If the daycare is OK with taking the child and having that child there, why is that an issue?”